It seems that William Henry Foley was born in Washington DC, United States in about 1826, although further birth details have not been located.

The earliest reference to William Foley’s circus career, was as a rider in La Forest’s Equestrian Circus which visited Philadelphia in 1842, (Source: Thayers Annals, Vol II). In The Circus in Australia: Spangles & Sawdust Mark St Leon records William Foley’s involvement in the circus as a clown, and the opening of his own circus:

William H. Foley was J.A. Rowe’s premiere clown at the Olympic Circus in San Francisco in 1850. Rowe sustained a serious loss when Foley defected – apparently the comic could not live on his salary of $1200 a month – to open his own ampitheatre. In May 1850, San Francisco’s Pacific News carried the first advertisements for Foley’s Californian Circus. Foley presented himself as an equestrian in the piece by Ducrow ‘The Wild Indian’. Within a month a fire had reduced his establishment to ashes but by the end of the year he had rebuilt his amphitheatre so that ‘another equal to this place of amusement could not be found in California’.
(Source: Mark St Leon; The Circus in Australia: Spangles & Sawdust, Greenhouse, 1983, p. 41)

By the time William Foley arrived in Australia, he was accompanied by his first wife Mrs W.H. Foley. Currently, however, there is no record of their marriage, or even his wife’s own name. William Foley was accompanied by his wife when he arrived in New Zealand in 1855. Later in Australia, William recorded in 1860 that they had one child, Wilhelmina who was still living at that time, but there is no indication of when or where she was born, or that she travelled with them.

It appears that the Foleys led fairly independent lives. As her acting career expanded, she spent more time performing in the theatre, often in a different city from William’s circus performances. During this period Mrs Foley was associated with the actor Vernon Webster, and by September 1857 it seems that she had parted company from William Foley.

Performing in New Zealand and Australia 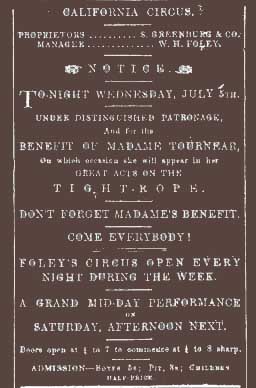 Foley’s Victoria Circus landed in Nelson from Melbourne on the 13th September 1855. It consisted of William Foley, his wife, specialty performers, four horses and four cases of animals.

By the 5th December 1855, the circus arrived in Auckland, and included performances with the mare “Lucy”.

William then returned briefly to Sydney. On the 29th January 1856, he returned on the “William Denny” with theatre performers, proceeding to open the Theatre Royal in Victoria Street East, Auckland, on the 3rd March 1856. Mrs Foley’s name headed the cast list for Othello, which is considered as almost certainly the first production of a Shakespearian play in New Zealand.

By August 1856, William Foley had moved to Wellington where he opened Foley’s Royal American Circus.

By February (or July?) 1857 the circus had shifted again to Lyttelton, followed by a nine month season in Canterbury.

By April 1858, William Foley had returned to Australia.

It seems likely that the original name of William’s second partner was Martha O’Neil, although she was also known as Maria Louise. Martha is recorded as being born in Sydney, New South Wales, in about 1839, but no birth registration can be found. Mark St Leon has confirmed that when she first appeared, in Sydney, as a rider in Malcom’s Amphitheatre in 1851, she was given the name of Maria Louise. About 1854, she was still performing at Malcom’s, but under the name of Mademoiselle Tournear – the real Mademoiselle Tournear was a famous french rider.

Madame Tournear, a circus artiste, accompanied Mr Foley on most of his tours (she was also apparently in charge of his children Kate and Johnny)…

Mr W.H. Foley is recorded in the Daily Southern Cross as arriving in Auckland on the 24th March 1865 on the “Prince Alfred”, with Madame Tournear arriving on the “Tararua” a month later on the 25th April 1865.

Arrival of the Prince Alfred with the English Mail
The Daily Southern Cross March 25, 1865 Page 4 Column 1 The P., N,Z., and A.R.M. Co.’s s.s. Prince Alfred, Captain Machin, arrived in port at noon yesterday after a good run of six days. She left Sydney, with the English Mail on board, on Saturday, the 18th at noon, and was detained beyond her usual time of sailing in consequence of the non-arrival of the mail from home. During the early part of the passage, she experienced light variable winds, with heavy cross sea. For the remainder, strong winds from S.E., veering gradually from S. to N.W. At noon on the 23rd, passed the Three Kings; at 5pm rounded North Cape in thick weather, which continued along the Coast.

At 2 a.m. on the 23rd, Edmund Tye, aged eight years, son of Daniel and Eliza Tye, was taken suddenly ill with the croup, he having been subjected to it before; and although all possible means were used for his recovery he died at 4 a.m., his body being committed to the deep at 5 p.m. the same day.

Mr. Foley has again arrived by this vessel with his unique troupe, consisting of ten first-class performers, fourteen horses, two African zebras, and one pony; also, his celebrated group of performing dogs and monkeys.